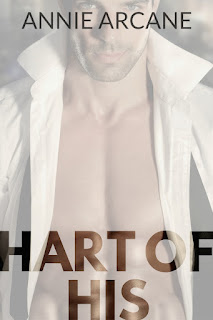 It’s been two months since I moved in with Mickey Hart.


1. 523 square feet is really f*cking small.
2. Sharing a bathroom is the worst idea ever. Especially when you’re a damn paraplegic.
3. Never lie. No matter what.

I love her. More than ever.

Even if I'm still a workaholic. And stubborn as all hell.

Warning: This book is a novella. The remainder of this series will be novellas. And Cale still has a potty mouth. So, yeah.

Hart of His, a novella and the second book in the Hart series, focus is Cale.  The book is a very quick read that has me conflicted regarding the hero, Cale Windermere.  The reason is his change from book one.  My head is spinning because I ended Hart feeling Cale is a strong man who wants a relationship.  His handicap is secondary to the man’s inner strength and personality.  Everyone deals with a disability differently but there is one truth that I’ve always found is a good person is a good person, and a jerk will always be a jerk.

In the first book, Cale is a good person.  He is a little insecure in his relationship, even though Mickey shows him repeatedly that she sees the man, not the chair.  In this book, Cale is an asshat, there isn’t any other description for him.  His inner dialog says he loves Mickey but his actions push her away.  Mickey find someone who appreciates you.  Give him a taste of his own medicine.
Don’t get me wrong, there is still a lot to like about this book.

I love the heroine.  Mickey is a very strong, loving woman who gives more than 100 percent to Cale.  At this stage of the relationship, she is willing to share her shortcomings and work to make a commitment.  We learn in the first book about her demons that she confronts regularly especially in her nightmares.

The story is well written and holds my interest.  The many facets of Cale come across well and credibly.  Cale, the hero, is a paraplegic.  His disability is depicted realistically.  The reader can experience life from his perspective and understand what hurdles a paraplegic must confront.

I like Cale’s family although they weren’t in this segment too much.  They are supportive and I hope they come back again.  I like that this chapter ends hopefully and not a cliffhanger per se.

Cale Windermere!  The reader is mostly in Cale’s head, but I don’t understand him.  I can’t wrap my head around his actions toward Mickey and his when she leaves the bed at night.  She is open with him about her past, and she is working through her issues.  His reactions are so off that I want to slap him.  It seems to me that he needs to understand a little more.

What I like about the first book, and what I think is missing moving to the short novella format, is the interaction of these two complex characters and their development individually and as a couple.  At the end of the first book, there is relationship development as the heart of the story.  The complexity of the characters and their individual development is the core of the beginning of this couple’s story.  It is authentic and real.

In this novella, I don’t suffer with Cale.  Granted there are some explanations but they aren’t presented in a way to make me feel.  Cale wants Mickey.  He wants Mikey to share her problems, issues, etc. but he doesn’t want her to see his struggle.  Reading his thoughts is like some disinterested third-party relaying information.

I miss getting Mikey’s perspective and feelings.  Book one ended with her baring all.  Now we pick up with Cale still angry.  Is he going to bend at all?  Does he want Mikey to leave?  I want more romance and acceptance.  At a minimum I want Cale to bend and the ending isn’t bending in my opinion.  If he can’t do that then let her move on.  There isn’t any warmth or love in his actions.

I admit my concerns are directly related to my aversion to serials, especially when they are released in these short little snippets.  There isn’t enough time to experience the conflict and who the hell is Dixon.  This character comes out of left field without any background.  We know both Cale and Mickey know him.  He isn’t a good person, and he is going to be trouble.  Why did he pop up now?

I’ll end by saying some of my favorite fictional characters I dislike and then they grow on me.  There is a lot of potential for the series to be great.  Cale is the first character that I love in the beginning and then turn on him during his part of the story.  That said I am anxious to see how Annie will redeem Cale.   I believe this Hart series will be very successful when the story is complete.

This girl…
Is going to be the death of me.
I don’t even know what the hell happened to us.
She was Cinderella. I was Prince Charming. It was a fucking fairy tale.
Until the clock struck midnight and everything went to…

♦♦♦
“Shit.”
The second the word left my mouth, I regretted it. Then instantly felt sick to my stomach. And started to have a full-fledged panic attack. Because even before she had the chance to fully awaken, even before she whispered my name into the darkness…
She reached for me. Like she always did. Every single time.
“Cale…”
Swiping blindly, desperately for her hand, I caught her hard by the wrist. My mind was racing so fast that it made my head spin. So goddamn fast I couldn’t think straight. I couldn’t even speak.
“What’s wrong?”
Yeah, I might actually hurl.
She whimpered softly and then, even softer, “You’re hurting me.”
Fuck.
With a groan, I loosened my grip. Immediately. Because I’d much rather castrate myself than ever cause her pain. But I didn’t let go.
I couldn’t let go.
“Are you okay?”
No, I wasn’t okay. I was anything but fucking okay. And I was scaring the shit out of my perfectly beautiful girlfriend too. But what was I supposed to say? What the hell was I supposed to say?

♦♦♦
Well, I sure as hell didn’t say the right thing.
And now I’ve hardly slept in forty-eight hours. Yeah, we have a damn near impossible deadline to meet. But you want to know the real reason?
I haven’t talked to her.
In forty-eight fucking hours.
Because she won’t answer any of my phone calls or texts. Not a single one.
Did I mention she’s nearly 3,000 miles away?
On the other side of the godforsaken country.
Fuck.

HART OF HIS
HART BROKEN

Pretty Nightmare
by J.A. Huss
Indie Anna Accorsi is back with the people she loves, Adam Boucher, Core McKay, Donovan Couture, and Maggie, but something isn’t right—still. Indie is fighting to remember her four missing years. Also, she is angry that Nathan isn’t here...

When Gods Die
by C.S. Harris
Sebastian St. Cyr, Viscount Devlin is called to investigate the murder of a beautiful woman found in the arms of the Prince Regent by Lord Jarvis. Jarvis’ loyalty is to Prince George, the monarchy, and England. Jarvis is not a fan of Seb...

What Angels Fear
by C.S. Harris
Mystery, thrillers, suspense are my first love when it comes to selecting books to read. While I read a fair number of historical romances, I am new to historical mysteries, so I am pleasantly surprised by how much I enjoy What Angels Fe...

Acer
by A.M. Hargrove
Acer Kent is the stereotypical baby of the family. He is more interested in fun and hanging out in the here and now than planning for an independent future and a career. He knows how to play his parents to get more time to grow up—until ...